Are you also frustrated by the spam call or messages from telecom operators and other companies in your Vodafone or idea? If yes then you will need to enable DND services. So, if you want to know that how to activate dnd in vodafone and idea then you are at the right place.

Many times happen that randomly-spam calls and messages comes in our mobile due to which we get disturbed during our any work. So, TRAI (Telecom regulatory of India) has established DND Services to avoid this massive problem among mobile users. 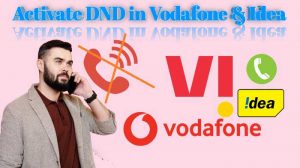 The full form of DND is Do not disturb which clearly means that activating the dnd services will not disturb the mobile users. DND Services are available in every telecom operator because it is linked through the TRAI Government of India.

As you request for the dnd on your number then within 3 – 14 days, DND services will be activated successfully on your number. Then, you will not receive any calls and messages from the telecom operator and companies.

If you have a Vodafone or idea Sim Number and want to set do not disturb services then we have mentioned step by step procedure. Therefore, you don`t have to worry about it.

How to unblock yourself on whatsapp?

How many Kinds of DND Services are there for every operator?

There are two kinds of Do not disturb services that are given in every operator which users can select according to their need. They are Full dnd and Partial DND.

Full DND Services:- By activating this full dnd option, all the unwanted SMS and calls will be blocked which comes from companies and other services. Every category of promotional or advertisement will not be done through your Calls and SMS on your number. As well as for always until you don`t deactivate.

Partial DND Services:-  You can guess the work of these dnd services by knowing the “partial” word. If you activate the partial dnd services then you get various options to select. You need to select the category, mode of communication, and days to stop those messages or calls.

Following are the categories available in partial dnd services to select:

How to enable Do Not Disturb in Vodafone & idea? 4 Ways

We have introduced the step-by-step process of each method for activating do not disturb services on your Vodafone sim number. So, you can follow any method which you feel easy.

Since the procedure for Vodafone and idea are same because they have merged together. Therefore, the process of activating any services is almost the same for both operators.

As we have mentioned that both Vodafone and idea operator are merged That`s why almost every service is provided to the customer online through their VI official app and website.

So, you can activate or deactivate the dnd service in idea or Vodafone at any time through the help of the VI application. As well as these, you can use many services through this official application of Idea and Vodafone.

If you are Vodafone or idea user then you should definitely install this application on your smartphone to track data from your number. So, let`s that it’s a process step-wise.

Follow the given below steps to Set DND Services on idea and Vodafone Number by app:-

How to on Hotspot in Jio Phone?

By following the above procedure, you would have known well that how to activate dnd in Vodafone and idea number. So, it is a very simple process of activating do not disturb through the vi application.

You don`t have to confuse that whether the option is for Vodafone or idea, it will automatically detect the operator of your number as your login. Now let`s know about the other method and its procedure.

How to remove channel in airtel DTH?

2. How to Set DND on Vodafone Number & idea using Website?

As we have seen above that we can enable dnd services on idea and Vodafone operator by using their official application which is VI app.

In the same way, there is an online web portal of vi through which you can also activate or manage do not disturb services of Vodafone and idea number.

This process can be done through the computer or laptop system also because it is through the website. Or you can also do through your smartphone the process that we have mentioned below.

Follow the below-given steps to know that how to activate dnd in idea and Vodafone sim through the website:-

How to reset UPI PIN?

As well as these, you will also get the Request ID of your dnd service through which you can track the process or you can complain to the VI or TRAI.

By following the above simple steps, you would have known well that how to activate dnd in Vodafone and idea number. You can do this process through any browser of your smartphone or computer.

3. How to Turn on DND Services on Vodafone operator using SMS?

By the way, you can apply this method for activating dnd services on telecom operator sim because it linked through the TRAI. Just you will need to send the SMS to a particular number.

If you follow this method then it may take more time to fully activated as compared to the above online method. because the activating of the process of dnd goes through the TRAI to the telecom operator.

Follow the given below steps to Stop unwanted messages and calls by activating dnd through SMS:-

As you send the messages then after a few seconds, you will be sent the messages that your request for dnd services has been done. So, you will need to wait for few days for activating it on your number.

By following the above method, you would have known well that how to activate dnd in Vodafone number through the SMS. It is the simplest method which can be done through any type of mobile.

4. How to Activate DND in Idea & vodafone using IVR Call?

The IVR is also one of the best mediums through which users can manage any services mostly related to the telecom operator, bank, etc.  You can activate dnd services, just by calling the toll-free number and by following their instruction.

Follow the below points to activate do not disturb services on your number through calls:-

In this way, you can easily activate dnd services on any operator of the sim card. It is also a simple procedure as an SMS method. We hope that you would have known well that how to activate dnd in vodafone and idea number using sms?

How to watch Jio TV on laptop?

How to connect Set top box to laptop?

How to deactivate Do Not Disturb on Vodafone & Idea?

After activating the dnd service if you want to deactivate in the future then you can follow the method. There are various methods for deactivating dnd services on your Idea and Vodafone number as an activating.

They are through the Vi official website, Vi application, SMS, and Smartphone. The process for deactivating will be almost the same as activating but some of the steps will be different.

Deactivate Do Not disturb services through App:-

By following the above method, you would have known well that how to deactivate dnd service on Vodafone and idea Number.

How to activate JIO SIM Number?

FAQ on How to activate dnd in Vodafone

No, any important or transaction SMS will not stop from your bank by activating do not disturb messages. If the mobile number is linked to your bank account then any messages will not be blocked from that Bank.

Only the promotional and advertisement purposes for messages related to bank services will be blocked. You don`t have to worry about blocking your important messages and calls.

All the important messages and calls will be delivered to you.

How do I stop Vodafone spam calls?

TO stop spam calls that come from telemarketing and other companies, you will need to activate the do not disturb mode on your Vodafone number.

If you want to activate then we have mentioned the various ways on how to activate DND in Vodafone as well as for idea sim also. So, just you need to request for activation, and then it will get activated within a few days.

What to do if DND Services not activated after requesting?

After requesting for the DND on any operator of Sim whether it is Vodafone or airtel or jio, if it does not get activated within 1 month. Then you need to register complaints to the TRAI or Telecom operator of your number.

There are various processes to register complaints about dnd if it doesn`t enable. If there is a mistake of Telemarketing operator then they will be charged a minimum of Rs.25000 as a fine by the TRAI government

How to set caller tune in BSNL?

How to set caller tune in Jio?

Conclusion on activating and deactivating dnd services on vodafone Idea

In conclusion, we hope that you would have understood the process of how to activate Dnd in Vodafone and idea Number using the various methods.

Ultimately, we have tried to explain and everything about the dnd service related to the Idea and Vodafone. The online methods through the website and application which we have mentioned are for only Vodafone and idea number.

And the methods which we have shared through the SMS and calls that are for the very telecom operator Mobile number such as Jio, Airtel, Vodafone, Idea, BSNL, etc.